Heike Burghart Rice brings years of experience in church music spanning various denominations, worship styles, and congregation sizes. Her passion is finding ways to use music to engage the church and the larger community in the story of God’s love and great work of redemption and recreation. Heike has conducted church choirs in works such as Mendelssohn’s Aus tiefer Noth schrei’ ich zu dir, “Hallelujah” from Christ on the Mount of Olives by Beethoven, “Sanctus” from Mass by Leonard Bernstein, Messian’s O Sacrum Convivium, and William Byrd’s Mass for Five Voices. Dr. Burghart Rice has studied organ with Richard Stewart, Gregory Crowell, and Roberta Gary and piano with Carol lei Breckenridge and Peter VanDessel. She earned a Bachelor’s degree from Cornerstone University in Grand Rapids, Michigan and Master’s and Doctor of Music degrees at the University of Cincinnati, College-Conservatory of Music. A champion of new music, Heike has performed works for solo organ by Marilyn Shrude, William Bolcom, and Steven Rice; and organ and electronics by Huw Morgan, Matthew McCabe, Daniel Pinkham, and Philip Blackburn. She enjoys participating in worship with her husband, Steven, and three children.

Made one in Christ Jesus, we, the members of Redeemer Lutheran Church seek to celebrate diversity and welcome all to fully participate in our community. All are welcome. 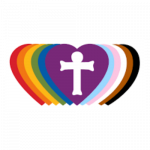 We are a Reconciling in Christ congregation.
Learn more about our “Welcome Statement”